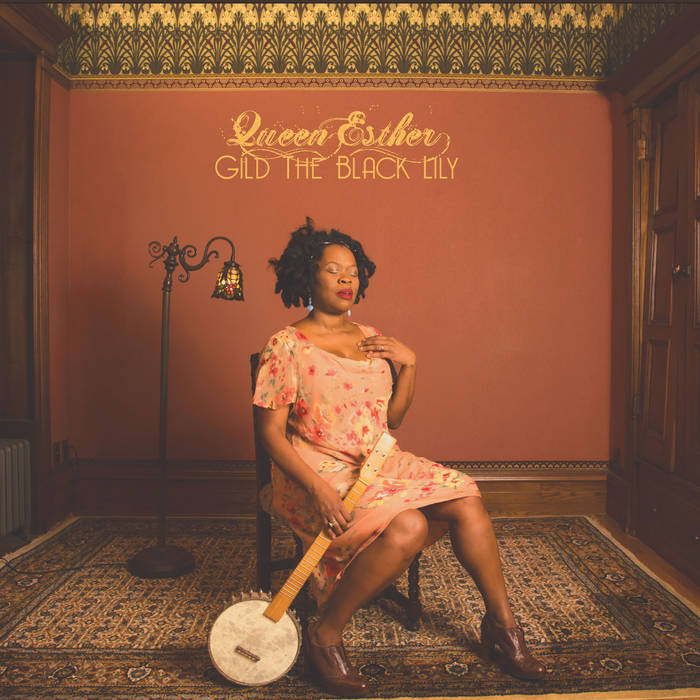 balatico All that's good in country blues is in Queen Esther's music Favorite track: I Love You.

fignewtons What a musical talent, what an amazing voice. Wonderful range and expression.

"Queen Esther’s fourth studio album Gild The Black Lily highlights the gift of being an African-American woman willing to make daring, reclamation-driven musical navigations into unexpected sonic spaces. It audaciously succeeds at crafting a narrative thread from gospel blues vocalist Blind Willie Johnson to The Eagles’ soft rock to her own heartwarming Black Americana. Notably, the album grows in distinction when Esther’s artistry expands beyond her prodigious roots and profoundly connects with the listener’s emotional core." - Parton and Pearl

"It’s revealing that “black” is often used as a qualifier before describing Queen Esther‘s music. Whatever music you are listening to is black music. In fact, Queen Esther descends from the Low Country, a foundational source of food, music, and community traditions for all modern America. We should call everyone else’s music 'Americana a la Queen Esther'." - American Standard Time

"If we look back at the basics of everything we now experience as American, there is a good chance that the origin is different from what we had previously thought. Much of what belongs to the Americana can be traced in part to the culture of those who came to the United States as enslaved people and often it is a woman who set things in motion. Often these are women who have since disappeared under the blanket of history and whose customs, cultural expressions and customs have been incorporated into what we now experience as Americana. Queen Esther's fourth studio album 'Gild The Black Lily' is often described genre-wise as “Black-Americana”. Actually, this is a kind of a step back to the original Americana and a tribute to those who formed the basis of a number of musical movements that we now capture under that umbrella concept, but actually roots music would be an even more accurate description." - The Next Gig (The Netherlands)

Gild The Black Lily’s Black Americana sound was curated by Harlem-based vocalist, songwriter, musician, and producer Queen Esther. Her creative output musically is the culmination of several important Southern elements, not the least of which are years of recording and touring internationally as frontwoman for several projects with her mentor, harmolodic guitar icon James “Blood” Ulmer, including a stint in his seminal band Odyssey. Queen Esther was raised in Atlanta, Georgia and rooted in Charleston, South Carolina’s culturally rich and enigmatic Lowcountry, a region with African traditions and Black folkways that span centuries and continue to inform her work.

With each song, the Blackness that raised her moves steadily from The Old West (The Black Cowgirl Song) and the foundations of the Black church (John The Revelator) to heartbreak (He Thinks I Still Care) with soulful declarations (All That We Are) and country-rock reworked into black country soul (Take It To The Limit) and back again. Ultimately, the album illuminates other facets of the Black sonic experience.

Track 9 produced, performed, recorded and mixed by Ben Rubin at House of Cha Cha
with vocals recorded by Amon Drum at The Bridge Recording Studio, Jeff McLaughlin on guitar

Track 10 and 11 produced, performed, recorded and mixed by Boo Reiners